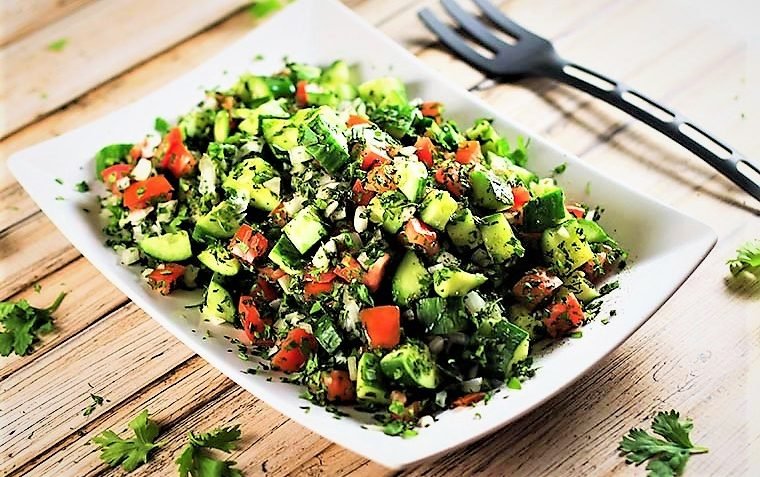 The main seasoning of this salad is fresh lemon juice, but depending on your taste, you can use a variety of sour seasonings such as vinegar, olive oil, and orange juice.
Another seasoning that you can add to this salad is a mixture of French sauce, mayonnaise, olive oil, vinegar, and a little salt and sugar, which gives a different taste to the salad.
The proportion of vegetables used to prepare Shirazi salad is important, and cucumber, tomato and onion have the largest share, respectively.
The vegetables used in the preparation of the salad should be finely chopped to create a good taste together.
Cucumbers can be used with or without the skin in salads.
Adding mint and parsley to the salad is optional.
Adding black pepper creates a pleasant flavor in the salad, but depending on your taste, you can use green pepper or bell pepper in it. :
Salad seasoning should be added before serving, and it is better not to add it early.

Shirazi salad is one of the traditional and old salads of Iranian people, especially the Shirazi people. Shirazi salad is usually found next to all traditional Iranian dishes and has many fans because of its simple and beautiful combination. This salad is prepared from the most basic ingredients available, i.e. tomatoes and cucumbers, and for this reason, it is usually the first option in preparing salads. But this appetizer, as tasty as it is, can cause more problems for those who have problems with digestion, as it is clear from the contents of this salad, the nature of this dish is cold, that’s why it is an option for those who get bloated quickly. It is not suitable unless they use hot ingredients such as mint or dried dill in its preparation, in which case it will solve their problem to a large extent. Cucumber is one of the ingredients that is widely used both in this salad and in other dishes. Cucumber is rich in water and fiber; Water and fiber are the most important elements for healthy digestion of food. The high amount of water and dietary fibers in cucumbers makes your body get rid of toxins in the digestive system and digest food more easily. If you are constipated, we recommend that you eat cucumber every day because regular consumption of cucumber is considered a natural remedy for constipation. Cucumber contains an anti-inflammatory flavonol called fistin, which seems to play an important role in brain health. Cucumber flesh It contains sterol, which will be very useful for reducing bad cholesterol in the blood. Cucumber plays a role in the prevention and treatment of cancer. This summer, like other fruits and vegetables, contains minerals, antioxidants and amino acids, which are necessary for healthy nutrition and can protect the body against many diseases. Other types of salad include: Greek salad, pomegranate salad, Caesar salad and cabbage salad.

When you have some leftover pieces of bread and you are not in the mood to make breadcrumbs for future cooking endeavors (and for those who refuse to waste them by throwing them away) there is this amazing Italian bread and tomato salad that might sound very simple but has become a favorite of mine. There are different takes on this recipe, as with all good recipes, so don’t be hesitant to change it up a bit as well.

Cut the bread into small cubes and fry them in a pan with about 2-3 tablespoons of olive oil until they are all crunchy. Halve the tomatoes, or if they are rather big you can quarter them. Cut the cucumbers into cubes as well. Chop the garlic very finely and mix it with the remaining olive oil, salt and pepper. Mix all the ingredients in a bowl and toss it a bit. Finally, sprinkle coarsely chopped basil leaves if you like.

The addition of mozzarella, cut or in ball shape, makes for a nice neutral color in the salad. The addition of onions, cut very finely, makes for another interesting note. Finally, you can prepare the bread cubes ahead of time and toss them in the freezer. Baking them in the oven makes this step especially practical.

This is the stuff sold at fancy restaurants with a hefty price tag to boot. Purslane on its own is delicious and sometimes I just eat it by smothering it in yogurt (I sometimes add a few crushed cloves of garlic to that yogurt – trust me you won’t regret it) but add a few more ingredients and you’ll have a salad that you can serve as a main dish without a second thought.

First off, wash the purslane thoroughly and drain the excess water. Cut the leaves roughly. Do not throw the stems away! Instead, just cut them a bit more finely. They taste just as good as the leaves. Wash the tomatoes and chop them up depending on their size. I like to use cherry tomatoes and usually just halve them. Chop the bell peppers roughly as well and add the corn to the salad, too. Cut the chicken breast in thin strips, season with salt and pepper and saute them in a pan with a bit of vegetable oil. Once the chicken is cooked, season the salad with lemon juice, olive oil and salt. Separate the salad into big bowls and top them off with the chicken. Sprinkle the remaining fat of the chicken pan onto the salad and serve.

Go nuts by adding other ingredients to this salad. These are the ones I usually have on hand.

You don’t need the chicken if you don’t feel like it, or you can change it up with some tuna or other meat for that matter.

Some think that salads won’t make you full unless you eat a lot, but you can convince any skeptic that this one won’t leave you hungry any time soon. Many people think that potato salads need mayo, but I beg to differ. You can add just a tiny bit to give it a bit of fat but skipping it entirely will keep your salad fresh much longer!

Cook the potatoes until soft and peel them. Cut into equal-sized cubes. Chop the other ingredients, remove the corn from the cob or use canned corn. Put it all into a bowl of your choosing and add the juice of one lemon. Sprinkle some salt and pomegranate molasses over it to finish.